Over the past year, I’ve started several dozens surgical cases. It is a specific group of patients requiring special attention.

Today I am going to review an excellent textbook that can become a lifebelt for those who are stepping into the realm of orthognathic surgery. I will also indicate several aspects on presurgical orthodontics that I consider the most critical. 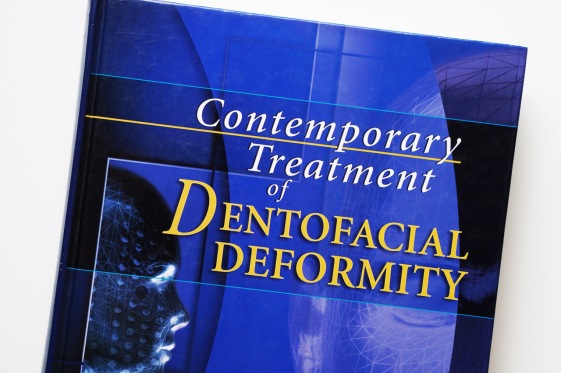 The book titled Contemporary Treatment of Dentofacial Deformity is a comprehensive text that quenches the needs of both an orthodontist and maxillofacial surgeon. It was published by Mosby in 2003. The editorial team consisted of Willian R. Proffit, Raymond P. White, Jr. and David M. Sarver.

The book opens with chapters on prevalence, need for treatment, and the development of dentofacial deformity. Here the authors accurately draw a borderline between surgical cases and those that can be camouflaged. Both physiological and psychological indications are thoroughly assessed.

The second part of the book is dedicated to diagnostics and treatment planning. Various approaches, including growth modification and orthodontic camouflage, are discussed and special recommendations for surgical appliances are given (wire sequence, the specifics of bands placement, various hooks designs, etc.). Importantly, the authors highlight that during the stage of treatment planning the role of the soft tissues outweighs that of skeletal parameters.

The part ends with a chapter ‘Combining Surgery and Orthodontics: Who Does What, When?’, which for an orthodontist is apparently the most practical few pages of the entire book (if you have a surgical patient tomorrow morning, but your memory has been erased by aliens a day before, read this).

The next part is on the surgery itself. It has about a hundred explicit graphical illustrations of different osteotomies. This part also covers adjunctive surgery: chin modification, rhino- and cheiloplasty.

The fourth part scrutinises specific types of dentofacial deformities, namely: mandibular deficiency, long face problems, class III, and asymmetrical cases. Specifics on pre- and postsurgical orthodontics are given for each of the group and detailed case reports complement the theory.

The last part of the book covers post-treatment stability and complications. The authors emphasise that they based their text on data from the Dentofacial Program at the University on North Carolina. I think that the table on a hierarchy of stability is of utter importance here. I hope I’m not violating any copyright by including it into the post.

Overall, the book is an exceptional piece of knowledge. It extends to 700+ pages and has 1665 illustrations. Despite the fact that it has been in print for 17 years, I believe it stood the test of time and still is an essential reading for every orthodontist and maxillofacial surgeon involved into orthognathic surgery.

I’d like to finish this post by indicating several points on presurgical orthodontics that may be helpful for those who are just getting into the area:

Search on this blog

Looking for an orthodontist in Moscow, Russia?